The DJ Marky and Friends banner returns to our Room One with a bang on the last Friday in August with guest appearances from LTJ Bukem and Calibre. All pioneers within their respective shades of drum & bass it’s a golden opportunity to hear the three producers play for longer where wilder leans will be sure to creep into each of their sets. Support comes from Swerve soldier, Tendai.
London’s resident minded Tempo Clash club night return to Farringdon to take over Room Two for the first time with footwork pioneers Rashad & Spinn topping the bill alongside a super special live performance from Eglo signing, Funkineven. Three of Tempo Clash’s resident team Om Unit, Kidkanevil and Blue Daisy – who are all stars in their own right – join Submerse and Aphotik in rapturous support.
With the relaunch of their webspace, Sonic Router return to FABRICLIVE with something of a renewed vigour with a set from Lost Codes boss, Visionist and a London debut from Finnish bass producer, Desto. Alongside them West Norwood Cassette Library returns to jack the core of Room Three alongside recent SR label signing Bambooman, who’s fresh off the back of his Gilles Peterson tipped Hollowed EP. 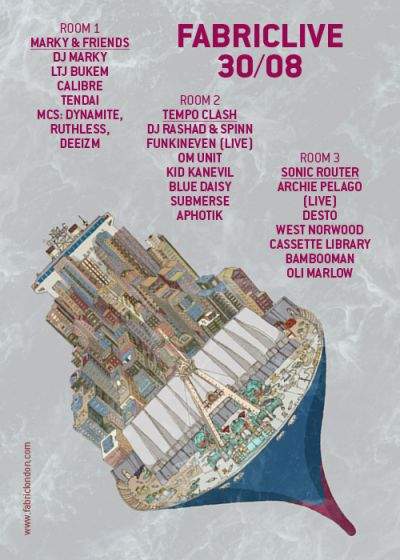